The title of this post is my current tagline on LinkedIn, and it’s a slightly cheeky summary of who I am.  On Twitter today, I was asked how I became a Technical Evangelist if I’m a biologist.  I’m posting this story here because it’s more of a personal journey than a ComponentOne story.

I mention I’m a biologist in my Twitter profile because my friend Andy Carvin was live tweeting coverage of Osama bin Ladin’s death, which raised a lot of questions about how the DNA results could be conclusive.  I tweeted back some clarifying answers, which he retweeted, which prompted a deluge of “what does a technical evangelist know about DNA?”  I updated my profile to answer the questions, and completely forgot about it.

I tell this story a lot, although not always in its entirety, so for Uma, here it is.  Upon review, I realize that (good lord) I’m a nerd.  Below are the highlights of the transition.

I’ve always loved science.  By second grade I had a chemistry set and a microscope and I knew how to use both.  My favorite Christmas present growing up was a very high quality butterfly net and Riker mounts–entomology was a hobby I picked up at Zoo Camp in Santa Barbara.  In high school, I was on the science team and computer team (we programmed in MS BASIC back then).

At Allegheny College, I had to choose a major, which was a tough decision.  I settled on Aquatic Environments, because that got me close to bodies of water, which meant I could go fishing.  This major and a few others were generalized into Environmental Science, and that’s my official Bachelor’s degree.

At Allegheny, we are required to do a senior thesis, called a “Comp”.  Most of the scientists I cited in my comp were at the University of Alabama, so that is where I went to graduate school.  My first semester, I met Perry Churchill, who was doing some work in bacterial bioremediation.  Our personalities, and my environmental background and interest in wet biology made us a great team, and I worked for Perry for two years, eventually earning my M.S.  We started looking at the genetics of these bacteria as a side project, which how I learned to manipulate DNA and purify proteins.

After graduation, I applied for a number of jobs, and the first one I got was at UAB as a molecular biologist.  I worked for several years in the Neurobiology Research Center, using advanced molecular and electrophysiological techniques to study GABA receptors.  GABA receptors are found in the brain, play a role in epilepsy, and are affected by alcohol and anesthetics.  They’re basically the off switches for your brain–when you’re “put under” for surgery, the anesthesia affects these receptors, knocking you out (you’re not asleep, just in a state of very low awareness–sleep is controlled by a different set of molecules and neuroreceptors).  While at UAB, I re-met my wife, and later moved to Pittsburgh with her, working for a time at Pitt, studying cystic fibrosis.

Along the way, I published a number of scholarly papers, and I can tell you exactly why the default CSS styles are the way they are.

It’s a little known fact I do not own any video game console, and haven’t played video games since the Atari 2600 in the mid-1980s.  But I do have a great telescope and I love to stargaze with my daughter.  At two-and-a-half, she would see the moon on a clear night, and ask to take the telescope out.  She could find Jupiter in the sky when it was visible before her bedtime.

My wife is key to the story, and I want to add how we met because it’s a funny coincidence.

While at Allegheny, I briefly dated a girl who lived across the hall from my now wife.  Tradition at Allegheny is that when a girl pledges a sorority, the sisters decorate the door of the pledge with the sorority colors and emblems.  Because I’m tall, I helped decorate my now wife’s door when she pledged.  She and I had a number of friends in common, but didn’t give each other much thought at the time.

During my time at UAB, my brother moved to Birmingham and was my roommate for several years.  I became friendly with a bank teller, we had lunch, got to talking, she had a single sister, I had a single brother, so we wet up a double date.  My brother and the teller’s sister have been married for 12 years now.

When my brother looked at business schools, he liked what Bama had to offer, and it was close to his then-girlfriend-now-wife.  During his admissions interview, he saw an Allegheny College diploma on the wall, got to talking, and connected names (my wife has her MBA from Bama, and was working on admissions strategy–she did the interview because no one else was around that day).  I got back in touch with his interviewer, whose door I had helped decorate a few years prior, and the rest (as they say) is history.  She and I have been married for almost 12 years now (my brother and I were married within 6 weeks of each other).

On our first date, my wife asked me what I would be doing if I wasn’t a scientist.  I told her I thought being a florist would be cool, because flowers are so diverse and beautiful, and they have the power to totally transform how people feel.  As it turned out, her parents owned greenhouses and a small florist shop.  In 1998, when an established shop became available in her hometown outside of Pittsburgh, we cashed in our 401Ks and bought it (if you’re counting, we bought the shop together before we were married).  This is what prompted the move from UAB to Pitt.  I do not have a creative bone in my body, so I worked in research to make ends meet, and she ran the shop.

By 1999, we could see the Internet was going to change things for business.  I had been building web pages since 1996 in research labs to share information between our collaborators, so I was familiar with HTML, JavaScript and CSS.  Pitt had a deal where employees could get a bindle of tools and OSs for $80, which I jumped on.  Using Alta Vista and an experimental search engine called Google (only available to academic institutions at that time) I found sites like 4 Guys from Rolla and Front Page Webmasters.  I bought a couple books from WROX Press, and taught myself how to build a completely data driven e-commerce site.  The first version was a pretty horrible mess of VBScript, JavaScript, HTML and CSS, but it worked, and I’ve gotten much better since then.

We were one of the first florists to have a website, and a number of trade magazines interviewed us for articles over the next few years.  In 2004, we did something crazy–we opened a second website, specializing in wedding designs and accessories.  I added a new technology called a blog to that site, and wrote weekly about the weddings we had done.  In just a couple years, we built our wedding and event business from a handful each year to well over 100 weddings and events each season.

For a number of years, we were the only florists in the industry to have two e-commerce websites, not to mention a blog.  People either didn’t understand what we were doing, or thought we were crazy.  In 2005, I spoke to a crowd of several hundred florists at the Society of American Florists (SAF) about blogging, and in 2007 SAF put us on the cover of their Floral Management magazine, in an article about how we attracted brides using the Internet.  Even today, there are a number of brides each summer we never meet–all the planning is carried out through email. 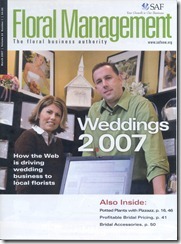 Also in 2005, I started Florist Blogs to help florists get online with a blog.  A number of prominent florists blog there, and the site generates about a million page views each year.  I’m updating the software from the now way out of date Community Server 2.1 to WordPress, which should breathe some new life into the site.

In 2010, to simplify life a great deal, we closed the retail shop, and my wife scaled back the number of weddings she handles each year, working out of studio space.  The only web presence we currently have is a WordPress blog, at http://bloomeryweddings.com/.

Rewind a couple years, back to 2000.  The dot com bubble is at a peak, and I wrote an e-commerce website.  Not many people could say that at that time.  My commute to Pitt was over an hour, and was grinding me down.  A company five minutes from my house was advertising for an e-commerce developer, a job which paid more than I was making in research.  I applied and got the job.  On a Friday in December 2010, I cleaned out my lab bench for the last time.  The following Monday, I walked into an IT job for the first time.

I loved the company and my job–I maintained several e-commerce websites for our toys division, implemented a new EDI system when the company implemented a new ERP system, and learned networking and PC repair.  Sadly, about 11 months after I started, the world would change forever with the September 11 attacks.  In a farm field about an hour from where I was at work that day, the first “line in the sand” was drawn in the fight against the terrorists, which emotionally affected this region a great deal.  I mention this event to bring the story full circle with why I mentioned I’m a biologist in my Twitter profile. 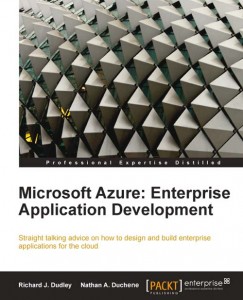 The combination of business cycles and terrorism crushed the economy, and I was laid off in 2003.  I started consulting, and eventually ended up on a three month contract at logistics company in Pittsburgh.  I ended up working there for seven years, becoming the senior developer responsible for our line of business applications and systems integrations.  In 2010, we were ranked #32 in Information Week’s “250 Most Innovative Companies”, so I got to do a lot of cool stuff.  My team looked at Azure as a possible solution for some external applications, and like a lot of companies, it was wait-and-see.  But, from that experience, my coworker Nathan Duchene and I wrote Microsoft Azure: Enterprise Application Development for Packt Publishing (I had pitched a completely different idea initially, but when they checked out my blog they asked I write an Azure book).  It’s a cool feeling–we have two 5 star reviews on Amazon, and the Kindle version just became available.

Because I’m self taught, I made it a point to attend every event Microsoft held in Pittsburgh (dragging my team with me), and as many user groups meetings as I could make.  I remember watching the MS evangelists (notably Ken Lefebvre, Stan Spotts, Geoff Snowman, Andrew Duthie, Lindsay Rutter, Dani Diaz and Dave Isbitski), thinking that would be the coolest job ever.

Last spring, ComponentOne was advertising for an evangelist.  I was familiar with their products, having evaluated them at the logistics company, and I had a great deal of relevant experience.  I looked again at their components, loved what I saw since my last look, and applied for the job.  I started with ComponentOne in August of 2010.

So, long story short, I became a technical evangelist from a biologist because we bought a flower shop.  The obvious and direct career path, right?  When you see my ComponentOne bio or Twitter profile (which I’m going to leave as-is for a while), you now know the highlights.  Thanks for reading my story!