It took me a while to find this tip, so here’s how to get Google Desktop to
index XML files:

I think by default GDS has XML file indexing TURNED OFF in
the registry – it won’t index them at all. This key is in
HKEY_CURRENT_USER\Software\Google\Google
Desktop\file_extensions_to_skip.  You’ll have to remove “xml” from that
list (I think)

The ‘xml’ extension was in this list, and I removed it.  Now I wait
until the reindex is complete and try some queries.  Update to follow.

The reindex has taken place, and there are plenty of XML files in the index
now.  I can find them by simply searching for *.xml, but I still can’t
search the contents of an XML file in Google Desktop Search.  Not such a
surprise, since Google Desktop Search’s help indicates it does not support XML
files (http://desktop.google.com/support/bin/answer.py?answer=12634&topic=201).

Before I get too far into what I’m trying next, let me explain my
need.  We use XML to send and receive shipment details with a business
partner.  From time to time, I need to be able to quickly locate a specific
shipment in the hundreds of XML files stored in the archive.  I’m positive
I’m not the only person in this situation.

I found a plug-in at http://www.trivex.net/ which will have
GDS treat XML as plain text, and that should hopefully improve the search.
Apparently Copernic can be set to do this
from its control panel, and that’s the next stop.  A plain text search is
good enough, but ideally, either GDS or Copernic would support an XQuery for a
specific element or attribute value.

So I’ve installed Larry’s Any Text plug in (http://www.trivex.net/).  That was darn
easy.  I had to add the XML extension to the config file furing
installation, and the plug-in has triggered a reindex.  I’ll let you know
how this one works out.

The index updated over lunch, and Larry’s plug-in did the trick.  I can
pull up the XML files I need simply by order number or some other
identifier.  It’s great.  Too bad it’s not an XQuery or something
similar, but it’ll work.  Keep in mind that GDS does not support wildcards,
so you have to enter the entire string you’re looking for, not a partial order
number.  Fortunately, element and attribute values are percieved as whole
words.

FedEx–“When it absolutely, positively has to be there overnight.”

UPS–“Moving at the speed of business.”

I have 300+ identical packages to ship next week.  No flipping way
amd I making the labels one at a time via a website.  I know both UPS and
FedEx have PC-based shipping software for their accounts, so I decided to
acquire such.

I started with FedEx.  I registered online, complete with FedEx account
number.  In order to obtain the software, you have to call your account
rep.  Not knowing who that was, I called the general support number, spoke
to a nice rep, explained what I needed.  The support rep sent a message to
my account sales contact.  This was about 8:30 pm on 12/5, and I didn’t
leave with a warm feeling anything was going to happen.  The next day I
realized I gave the nice rep my wrong extension, called back, spoke to yet
another nice rep, and gave my correct extension.  Another message was sent
to my acocunt sales contact.  Even with the wrong extension, the main
number on the account is correct.

So, my Plan B was UPS.  I registered at www.ups.com, complete with account number, and
filled out the online request form.  This was right arount 3:00 pm on
12/6.  At 1:00 pm on 12/7, I had WorldShip 8 in my hands.  22 hours
from request to delivery.  Still nothing from my FedEx guy nearly 40 hours
later.  Looks like 300+ packages are going UPS.  On a personal note,
I’m a little torn by this.  I grew up in Louisville, where UPS is
based.  But I now live near Pittsburgh, where FedEx Ground is based.
Either one is a home-team to me.

Small businesses have weird needs.  Sometimes (as in this case) we have
huge shipments all at once.  Business owners  are pretty much 24/7
living their business.  This phone tag stuff is so ’80s.  Hard to
believe it’s so tough to give your business to a company
sometimes.

My newest GTD tool is an oldie but a goodie.  I’ve started packing my Swiss Army Knife (Ranger model), and it’s quite amazing how many things never even hit my inbox now.  I’ve had one for years, and it’s found a lot of use in my office.  Now, it’s finding utility all over the place.  Most of the things I prevent from hitting my inbox would go on an extensive list in wifey’s head, only to come back at some time when I couldn’t do anything about it.  Mainly it’s the screwdrivers that find use, but the cutting tools come in handy, and if you need that screwpull, good times are ahead.  Just remember to take it out if you’re flying! 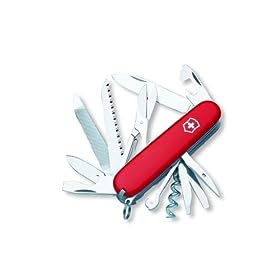